As you’ll read in the letter below, this patient’s parents are very pleased with what their son has accomplished using Vision Therapy and Occupational Therapy. His father states, “with the help of Dr. Collier and Corinne Williams, as well as the occupational therapists at Advanced Therapy Solutions, Cormac has made remarkable progress and enjoys a life no longer plagued by anxieties, fears, ocular dysfunctions, and teacher misperceptions.”

When our son Cormac was born, several friends and relatives commented on the attentiveness of his eyes. One friend said that he seemed very present, that he seemed to be taking everything in. Cormac also began to read and read well at a very young age, which really wasn’t so surprising to us given that we are both language teachers. But for all his precociousness and visual presence, Cormac also had clear issues. Bright light bothered him tremendously, as did stairs, heights, open spaces, and crowds. He not only shied away from these things but often had what can only be called panic attacks. He would refuse to walk down a crowded hall or he would seek refuge under a desk when asked to move his seat. He could be alternately hyper-attentive and hyper-inattentive to detail, and any attempt to focus him or break his focus would result in resistance and panic. Teachers deemed him to be non-compliant and a disciplinary problem. At our behest, Cormac’s pediatrician recommended a child psychologist, who diagnosed Cormac with General Anxiety, and in her very kind way tried to help our son, but after several months of sessions, we saw no change in the frequency or nature of Cormac’s anxieties.

The intensity of these problems peaked in first grade. Cormac had attended a Montessori preschool for three years, where his idiosyncrasies were tolerated quite well, and were most likely masked, in fact, and so his anxiety attacks were mostly limited to non-school situations. But when he began public first grade, he fell apart. He had daily anxiety attacks. He was bothered by the long hallways, by crowds of students in the halls or the cafeteria, and by gym in all its manifestations. He complained of the florescent lights, of the noise from his classmates, of any changes made to the room or his placement in it. He sat in the hallway at lunch or with his back to his classmates during class or in the after school program. He sometimes tried to sit beneath his desk with a hood or hat pulled over his eyes. At the same time, he also demonstrated extreme visual memory and almost compulsively drew elaborate maps of rooms and spaces familiar to him. But he could not abide by any change to these physical spaces. For example, he returned from February break one Monday to find the classroom completely rearranged, and he fell to the floor crying. His first grade teacher frequently sent him to see the school social worker, where he completed many of his assignments. He also sat with her at lunch. His second grade teacher was not so tolerant, and often punished Cormac for his bursts of anxiety, and often engaged in punitive actions that were downright humiliating.

Cormac also continued to have difficulty outside of school. He could not climb stairs or ride a bike. He had difficulty completing a jumping jack or catching a ball. An attempt at canoeing on a lake caused severe disorientation and extreme panic. A trip to New York city resulted in his crawling along the bases of buildings and walls because the buildings looked to him as if they were going to fall on top of him. We were at a loss.

Our pediatrician then recommended a child psychiatrist who observed Cormac and then conferred with a neurological specialist who diagnosed Cormac with Sensory Integration Disorder. The two doctors recommended Occupational Therapy and sent us to Advanced Therapy Solutions, where the therapists determined that most of Cormac’s sensory issues were visual (and secondarily auditory). They developed a treatment plan but strongly recommended a visit to a behavioral optometrist and a vision therapist. This is how we came to see Doctor Juanita Collier and vision therapist Corinne Williams. Without going into the details of the diagnosis and treatment plan, Dr. Collier and Corinne were able to work with Cormac to re-train his eyes to work more effectively. They worked with us, giving Cormac eye exercises to complete at home, and they worked with the school psychologist and classroom teacher (at a new and more responsive school) to determine the best classroom accommodations for Cormac’s diagnosis, and even determined that Cormac was using profoundly ineffective strategies to read that he had to have learned by trial and error and which were causing extreme eye strain and headaches. With the help of us and the classroom teachers, Dr. Collier and Corinne were able to help Cormac to read more effectively. As Cormac progressed with his vision therapy, the anxiety attacks diminished as did his avoidance or fear of crowds, hallways, and open spaces. Colored panels helped diminish the glare of the florescent lights. He became more compliant at school as he became more capable of altering his visual focus. Cormac still demonstrates extreme visual memory, but he has become less reliant on it for navigating his world, and subsequently experiences less panic when he encounters changes in this world, such as a new seating arrangement.

Today, Cormac rarely has any anxiety attacks and he has few issues in school. (Most remaining issues have to do more with gym class than with the academic classroom). He wears glasses for distance and continues with eye exercises at home to fine tune a few remaining issues. He no longer relies on elaborate mental maps of physical spaces to negotiate his day. He learned to ride his bike without training wheels this summer. We returned to that lake this past August and successfully went canoeing. We returned to NY this fall and walked the streets without incident. Cormac is still a work in progress and we continue to address a few challenges, such as trepidation with heights and stairs, but with the help of Dr. Collier and Corinne Williams, as well as the occupational therapists at Advanced Therapy Solutions, Cormac has made remarkable progress and enjoys a life no longer plagued by anxieties, fears, ocular dysfunctions, and teacher misperceptions. 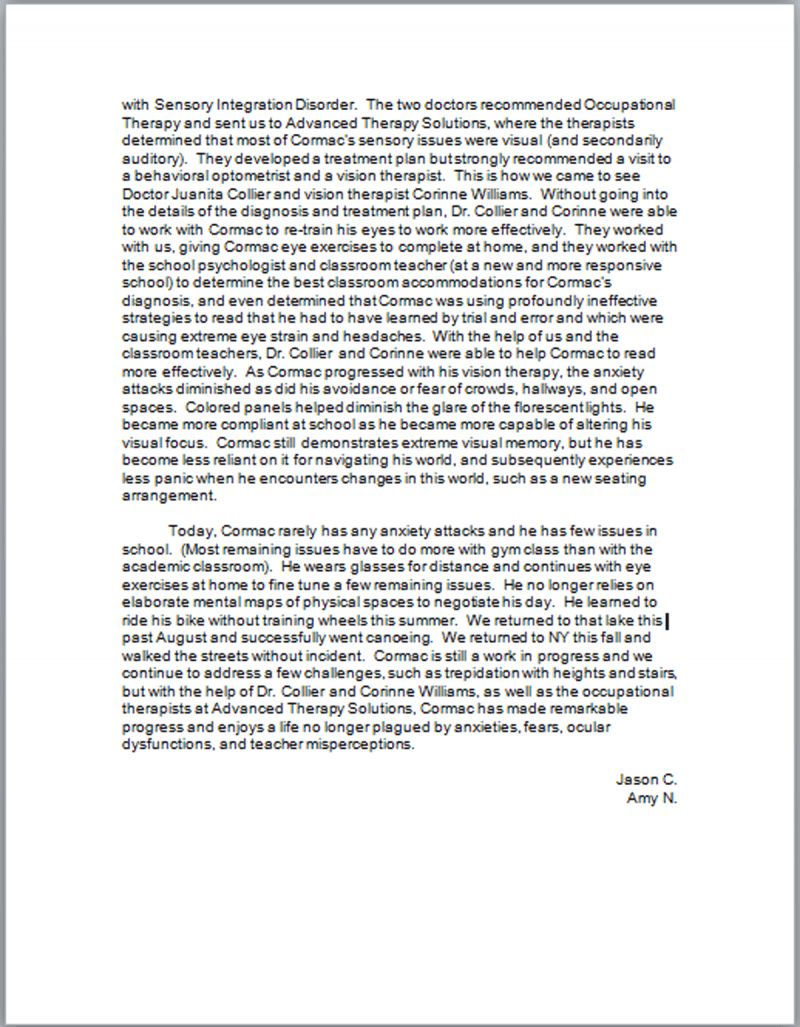 In conclusion, Vision Therapy and Occupational Therapy work well together to improve children’s lives.
Please note: In-office therapy under the direction of a Behavioral Optometrist using prisms, filters and lenses, as used with our patients, is far more effective than home-based therapy.