Due to COVID 19 precautions, all patients and staff are required to wear masks at all times.

Here are Vision Therapy testimonials, plus a video from one of our patients.

Vision Therapy is for people of all ages… 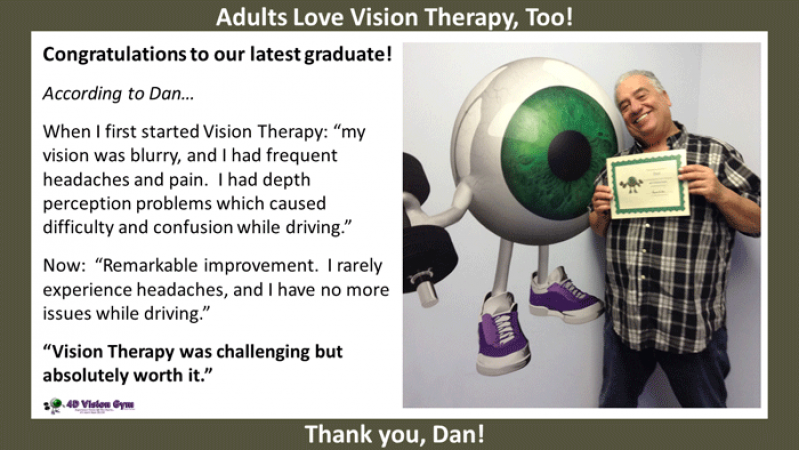 We begin with this very special, Vision Therapy testimonial by one of our patients, Ethan, and his Mom.

Ethan was struggling with reading, and since starting his Vision Therapy program his reading level has increased dramatically in just a few months.

“I like to read now because my eyes are doing better at it.” ~ Owen

“If it wasn’t for eye therapy, my grades wouldn’t be so good. I made High Honors for the first time and went from the lowest reading group to almost Advanced!” – Olivia M.

“I did not feel weird on the lake ,” said Cormac.

“We were paddling around on a lake in the woods and Cormac felt very comfortable, like everything was still and not moving around him,” said Dad.

“Cormac reached a threshold over the summer. He overcame so much difficulty with physical activities. He could now do jumping jacks and jump rope. Swimming became easier, as well.” ~ Cormac’s Dad

“Reading became much easier with an increase of 1.5 grade levels. Basketball and Baseball are much easier, able to hit baseball much more accurately now. His confidence has increased and no longer has a paraprofessional working with him. His attention span has increased and his behavior is much calmer. Quinton used to become very fatigued easily, but that has changed, as well. Huge increase in cognitive abilities, especially math! As much as parents don’t want to do the practicing, you should stick with it! It pays off.” ~ Mom, Quinton B.

“I can see better without double vision.” “I can play on monkey bars better. It is much easier now.” “Seeing baseball and tennis balls coming at me is much better.” ~ Ari B.

“I can see the board from the back of the room. I don’t bump into the walls at school anymore. You have to be patient with the Vision Therapy because “Wow, it works!”

“I would definitely recommend it to other teenagers.” ~ Rebecca B.

Or as our former First Lady, Lady Bird Johnson, said regarding her daugher, Luci:

“She had long had an eye condition, now the well-known name for it is dyslexia. But there are many, many forms of that, where what you see doesn’t get translated to the brain in quite the way it should. It used to be a puzzle to her teachers and to us, that this child that we thought was so bright would not make good grades. And the teachers would talk to me about it and I would take her to the best eye doctors that I could, according to what my peers, the wives of other congressmen and senators, told me was the best eye doctor they’d found. And they’d say, “Nothing the matter.” Finally–no, this was even after this time–she fell into the hands of the doctor who finally discovered her ailment, was maybe after Lyndon became vice president. So it may have been still a year in the future. But it’s something that I want to tell a little bit about, because that lady doctor who took care of Kennedy — Janet Travail directed her, I think, as I recall, to a doctor, and his name I will too remember in a few minutes, because he has remained our lifelong friend. [He] figured out what it was, gave her a series of eye exercises that changed her whole life and personality, because she became an achiever up to her mental capacity, her very remarkable mental capacity, whereas before, because of this eye problem, she had just kind of been stunted, and frustrated, and angry. It changed her personality, her rate of performance; it was a wonderful blessing.”

“Dr. Collier, Erin, Amy, Kelsey and the ENTIRE STAFF are AMAZING! They not only treat my son’s visual impairments, but through therapy, provide him with valuable life skills as well.

When Logan’s pediatric neurologist recommended 4D Vision we didn’t realize the correlation that existed between his sensory issues and his vision. He had always passed the school-based vision screenings. We were amazed to find out he had several visual impairments that greatly contributed to his academic, organizational, and attention issues.

We are so grateful for each and every one of you and your kind and caring ways. Thank you, from the bottom of my heart”
-Wendy M.

“After Mary finished her therapy, her Mom wrote, ‘there has been a dramatic change in Mary’s daily performance and attitude. Reading has become a pleasure instead of an unavoidable chore! Mary is excelling in all subject areas, including spelling (one of her worst!). I love Mary’s new self-confidence and positive attitude – she no longer calls herself or thinks of herself as ‘stupid’ and ‘the slowest in class’.”
“Holly’s Mom wrote, ‘I wish I had known you could have ‘better than 20/2’ vision and not be able to unscramble the words on a page. I wonder how many kids struggle through school with a vision problem that could be corrected and no one even knows.”
“After Mike was done with his therapy, his Mom wrote, ‘Mikey is now in 8th grade and performs at or above grade level in all subjects, and we attribute that to the skills and tools he learned in Vision Therapy. After watching Mikey’s progress and discovering the applications of Vision Therapy, I have become a vision therapist myself, and have the opportunity to help others like Mikey fulfill their potential.”
“Brooke’s Mom writes, ‘Because of Vision Therapy, my daughter, Brooke, now reads with added enthusiasm and excitement. Both her school work and her attitude about school have improved and we couldn’t be more pleased!”
Please note: In-office therapy under the direction of a Behavioral Optometrist using prisms, filters and lenses, as used with our patients, is far more effective than home-based therapy.